You are here · Home

The Stralsund Speedway Club was founded in April 1958, when the BSG Motor Stralsund motorsport group joined the club, so that the MC had 150 members.

Construction began on the racecourse in the Paul Greifzu Stadium as early as 1957 - following a resolution by the city council at the time. From lottery funds, 130,000 GDR marks were made available for the project. Later there was another 100,000 marks.

Even though VEB Bau was doing the main work at the time, there were also many volunteers working as part of the National Reconstruction Works (NAW) to prepare the stadium for the first race. And that started on May 4, 1958. At that time, 20,000 spectators watched the duels on the almost 400-meter track.

No wonder, because with Hans Zierk from Tribsees the MC Nordstern also had a local winner at the racing premiere in Pauli.

The stadium was inaugurated on July 6, 1958 by Mayor Motczinski for the Baltic Sea Week. In front of 20,000 sports enthusiasts, the sports facility was given the name of driver Paul Greifzu, who died in a 1952 car race in Dessau.

One of the greatest successes was Hartmut Ernst's GDR championship title in 1977. As a team, the Northern Lights won the bronze medal in the late 1970s and early 1980s.

Tobias Busch became German Junior Champion in 2007, Mathias Schultz experienced the runner-up title in a thrilling final in front of a home crowd in 2007, after he was on the top podium in 2003 and 2005.

The Bundesliga team made it to the final for the first time in 2012, Stralsund was unable to defeat permanent champions Landshut, but was happy about silver.

In the 2015 season the team became the "Nordsterne" German team champion.

In the meantime, the people of Stralsund have organized more than 400 races. The Lord Mayor's Cup and the Baltic Sea Cup are traditionally coveted trophies.

But the MC Nordstern has also long since made a name for itself with races for the European Championship or World Cup events. The German single champion has also already been crowned in Stralsund.

You can find more information about the races in the season on the following pages! 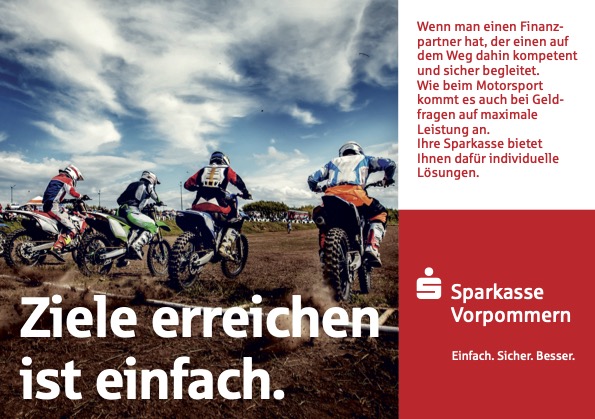